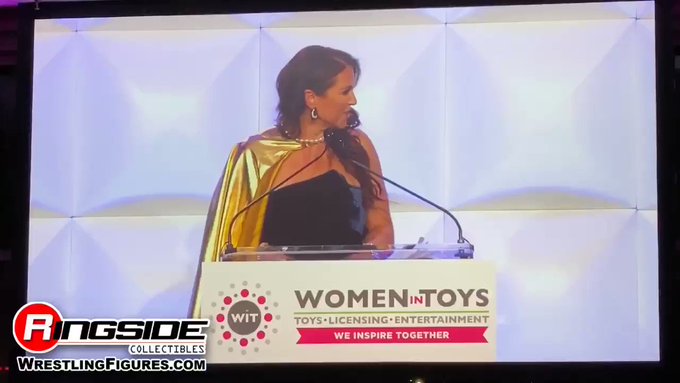 The 2020 New York Toy Fair Women In Toys Changemaker Award winner Stephanie McMahon recently revealed who is credited with coming up with the original idea for WWE Superstars to be made into action figures way back in the day.

As she was accepting the aforementioned award at the NY Toy Fair, where the latest line of WWE Mattel action figures were unveiled, Stephanie gave a speech about getting inspired by her mother, former WWE CEO Linda McMahon.

"My mom was then CEO of the company, and I think that's incredibly important because for me, I always had her as my example," Stephanie said while accepting the Women In Toys Changemaker Award for 2020. "I've always assumed women worked at the top of the business. I assumed that they should be CEO."

According to Stephanie, a combination of her brother playing with "G.I. Joe" action figures as a kid and their mother, Linda, thinking WWE Superstars would make for perfect action figures is the reason why WWE action figures exist today.

"It was actually my mom that saw my brother play with his G.I. Joe's that had her first idea of: wow, we should have a licensing business for WWE," said Stephanie. "I think our superstars would make great action figures," Stephanie said. "And here we are so many years later with our partners Mattel."

Check out video highlights of Stephanie McMahon's Women In Toys Changemaker Award acceptance speech from the 2020 NY Toy Fair below.