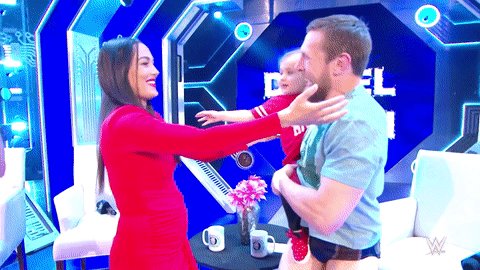 During this week's episode of WWE Friday Night SmackDown, the two newest female additions to the WWE Hall Of Fame were confirmed.

On WWE Friday Night SmackDown, it was officially announced that The Bella Twins -- Nikki and Brie Bella -- are both going into the WWE Hall Of Fame this year, joining the nWo and Batista as confirmed inductees for the 2020 class that will be going in during the ceremony scheduled for WrestleMania Weekend this April.

Check out the official announcement regarding The Bella Twins' WWE Hall Of Fame induction below, as well as video clips of the news being announced during the WWE Friday Night SmackDown broadcast.

Nikki & Brie Bella, two of the most iconic female Superstars in WWE history, are the latest inductees into the WWE Hall of Fame Class of 2020. They will take their place in the hallowed hall on Thursday, April 2, in Tampa, Fla., during WrestleMania 36 Week. The news was first revealed by Alexa Bliss during "A Moment of Bliss" on Friday Night SmackDown.

The Bella Twins join Batista and nWo members Hulk Hogan, Scott Hall, Sean Waltman and Kevin Nash in the 2020 class so far. Nikki & Brie will react to the huge news in an interview on WWE Backstage this Tuesday at 11 p.m. ET on FS1.

The road to the WWE Hall of Fame was a long one for Nikki & Brie, who started their WWE careers by having a little fun deceiving their opponents. Brie debuted in August 2008 and strung together a series of wins, seemingly getting a second wind after scampering under the ring. However, their ruse would soon be revealed to be a bit of "Twin Magic," as it was discovered that Brie's twin sister Nikki was hiding under the ring, ready to switch places and pick up the victory. Though they had been found out, that tactic would go on to pay off for the Bellas countless times over the years.

Though "Twin Magic" was their calling card early on, Nikki & Brie proved they were extremely capable competitors. Brie was the first to capture championship gold, defeating Eve Torres to become WWE Divas Champion in April 2011. Nikki followed suit one year later with a victory over fellow WWE Hall of Famer Beth Phoenix. Nikki captured the title again at Survivor Series 2014, dethroning AJ Lee to kickstart a reign that would last 300 days, the longest in Divas Championship history.

Throughout their time in WWE, The Bella Twins were part of many classic rivalries, facing off with the likes of Charlotte Flair, Sasha Banks, Becky Lynch, Stephanie McMahon and even each other. They also helped introduce a new generation of fans to WWE with their hit reality shows "Total Divas" and "Total Bellas," as well as their YouTube channel, which boasts more than 2.6 million subscribers.

And now, they're being recognized for their incredible careers with the ultimate honor: induction into the WWE Hall of Fame. Don't miss The Bella Twins taking their place in sports-entertainment history during the 2020 WWE Hall of Fame Induction Ceremony on Thursday, April 2, during WrestleMania 36 Week. Tickets for the ceremony are available now at Ticketmaster and the Amalie Arena box office.

JUST ANNOUNCED! The @BellaTwins will enter the #WWEHOF as a part of the Class of 2020!!#SmackDown @AlexaBliss_WWE pic.twitter.com/xhEBxAZu5s