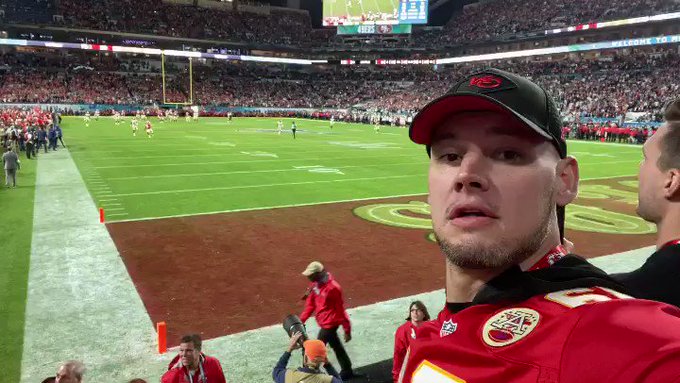 The 54th annual NFL Super Bowl was a special occasion for WWE Superstar and Kansas native "King" Baron Corbin after the Kansas City Chiefs ended a 50-year streak of not winning "the big one" after defeating the San Francisco 49ers with a final score of 31-20.

The NFL Super Bowl LIV game took place inside the Hard Rock Stadium in Miami, Florida on Sunday, February 2, 2020 -- a date that football-fanatic turned WWE Superstar Baron Corbin will remember for years to come as the Chiefs ended a lengthy streak with their come-from-behind victory over the betting-favorite 49ers -- and the 2019 WWE King of the Ring was among those in attendance.

Following the game, Corbin, a former offensive lineman for the NFL's Indianapolis Colts and Arizona Cardinals franchises, took to social media to share a photo of himself in the stands along with a celebratory win posted on behalf of his beloved Kansas City Chiefs.

Additionally, several other WWE Superstars and personalities took to social media to post tweets immediately after the game, most of which were posted to congratulate Corbin, who is the biggest well-known Chiefs fan on the roster.

Featured below are some of the immediate post-Super Bowl LIV tweets posted by WWE talents and personalities that were re-tweeted soon after the game by the official WWE On FOX Twitter feed.

Friday is gonna be fun on SmackDown. https://t.co/K5oUD3VPFj

From OUTTA nowhere the @Chiefs comeback for the win at #SB54!@WWERollins | @RandyOrton (via @NFLonFOX) pic.twitter.com/8uG8GQPcXU

The 49ers at the beginning of the 4th quarter vs the end of it #SuperBowlLIV pic.twitter.com/7DkGg5NtQD

Congrats to the @Chiefs and Andy Reid...well deserved. Apologies to the @WWEUniverse for the insufferable introduction I will have to do for @BaronCorbinWWE on @WWEonFOX @WWE on #SmackDown
For the record,he is NOT the MVP. (He just texted me that I need to start practicing ??????????)