Whether or not Matt Hardy is ultimately revealed as "The Exalted One" of The Dark Order faction in All Elite Wrestling remains to be seen, however one thing is for sure "Le Champion" of AEW, Chris Jericho, isn't interested either way.

For those that missed it, Matt Hardy recently posted a video on Instagram where he talked about how Randy Orton didn't finish him despite the attack on Raw and how he feels that he is "unkillable."

AEW World Champion Chris Jericho decided to comment on the video, telling Hardy to "stay home," which led to Matt responding back to Jericho to tell him to worry about himself.

Check out the recent back-and-forth exchange between Hardy and Jericho below. 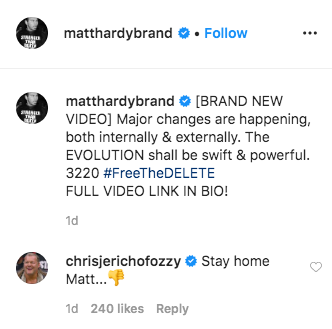