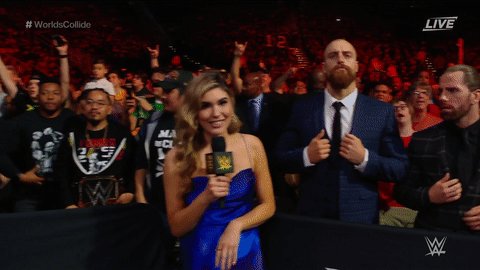 The stakes were raised for the two remaining teams in the finals of this year's annual Dusty Rhodes Tag-Team Classic Tournament on Saturday night.

The finals of the 2020 Dusty Classic will feature The Grizzled Young Veterans (Zack Gibson & James Drake) taking on the team of The BroserWeights (Matt Riddle & Pete Dunne) on the next episode of NXT On USA.

WWE's black-and-gold brand returns to their weekly Wednesday Night Wars time slot at 8 p.m. Eastern Time / 5 p.m. Pacific Time on Wednesday, January 29th, with the tourney finals -- which are now also scheduled to be a number one contender title eliminator match for the right to challenge for the NXT World Tag-Team Titles at the next NXT TakeOver live special.

During Saturday night's WWE Worlds Collide: NXT vs. NXT UK live special event from the Toyota Center in Houston, Texas, it was announced in a ringside interview segment with the aforementioned foursome that the winning team in the 2020 Dusty Classic Finals on Wednesday's edition of NXT On USA will advance to NXT TakeOver: Portland 2020 to challenge for the tag-team titles.

Currently, The Undisputed ERA's Kyle O'Reilly and Bobby Fish are the reigning NXT World Tag-Team Champions. If they hold onto the gold until Sunday, February 16th -- the date of NXT TakeOver: Portland 2020 -- they will be defending the titles against either The Grizzled Young Vets or The BroserWeights in the second official championship contest booked for the live NXT special.

Previously announced in a championship showdown for the 2/16 live NXT special from Portland is a one-on-one battle featuring NXT Women's Champion Rhea Ripley defending her title against Bianca Belair.

NXT TakeOver: Portland 2020 is scheduled to take place from the Moda Center in Portland, Oregon on Sunday, February 16th. The show will stream live for members of the WWE Network. For information on how to subscribe to the WWE over-the-top digital subscription / streaming service, visit WWENetwork.com.

The winners of this year's #DustyClassic will go on to #NXTTakeOver: Portland for an opportunity to capture the NXT #TagTeamChampionship! #WorldsCollide pic.twitter.com/gTgExkNL0q