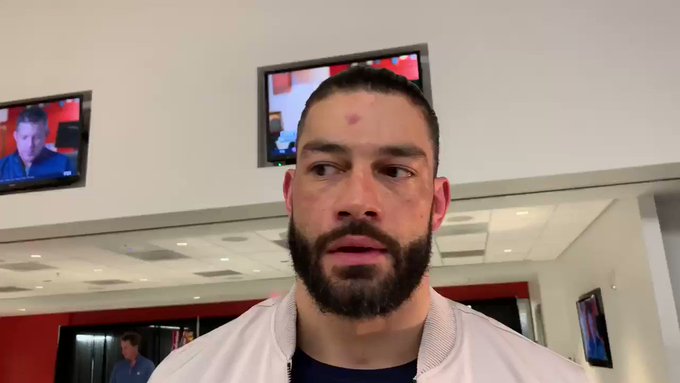 During a recent video interview with the sports division of The Los Angeles Times, WWE Superstar Roman Reigns reveals that he found out about the Kobe Bryant tragedy via a text message that Triple H showed him backstage at the WWE Royal Rumble 2020 pay-per-view.

"I actually found out at Minute Maid Park right before The Rumble," Reigns said. "Triple H received a text message and he showed it to me, and I just didn't believe it, to be honest."

He continued, "I'm a Lakers fan. I watched religiously throughout [Kobe's] career, and I've always just been a huge fan, massive respect."

The Big Dog would go on to elaborate on feeling such emotion for someone he admits was essentially a stranger, which is a common theme that many have admitted to experiencing when discussing the tragic news in television and radio interviews.

"I never really thought losing someone like that... he's a stranger, obviously a public figure, and I've seen him and watched him, but he didn't know me and I didn't truly know him, but I didn't realize it would affect me so much," admitted the WWE veteran. "It really did."

Reigns added , "On top of The Rumble just being an emotional roller coaster in its own right, it really just saddened me and broke my heart, obviously to hear the loss of Kobe, and then his daughter as well, GiGi, my heart just goes out to his wife, the three girls that were left behind, all the families that were involved, and the pilot and his family. It's just an abrupt lost, and I really feel like it shook the world."

Check out video footage of Roman Reigns' interview with The Los Angeles Times Sports division via the tweet embedded below from their official Twitter feed.

WWE superstar @WWERomanReigns is a big Lakers fan and he found out about Kobe Bryant's death before Sunday's Royal Rumble from @TripleH. He flew home immediately after the event and when he got home he went to his daughter's room. She was sleeping but he just held her and cried. pic.twitter.com/2RKNT5tmzR