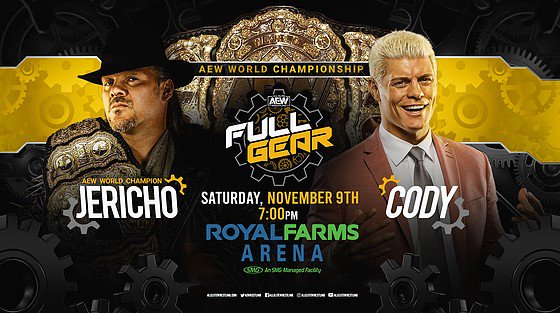 AEW will be bringing a panel of three "esteemed judges" to the Full Gear pay-per-view for the main event between Cody Rhodes and World Champion Chris Jericho.

AEW did not name the judges in their announcement, but it was noted that the judges will vote on the winner if the match goes past the 60-minute limit. if there is not a unanimous vote, the winner will be the one with the majority of the votes.

You can read AEW's full announcement below:

-- Panel of Esteemed Judges Could Decide Fate of Chris Jericho vs. Cody at Royal Farms Arena in Baltimore --

In the event there is no winner at the end of the 60-minute time limit, a panel of three esteemed judges, who will be seated at ringside, must vote for a winner. In the event there is not a unanimous choice, the majority decision will be the winner. This will ensure that a draw will not be the outcome of this World Championship title match.

Stay tuned for updates on the judges and the Full Gear card.