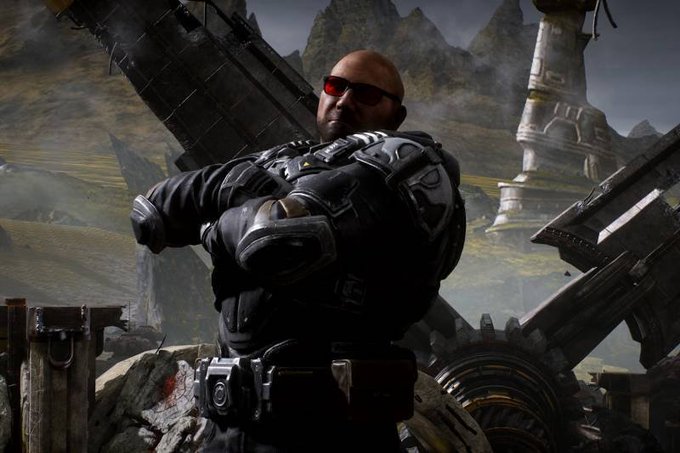 Batista announced today that he will be a playable character in the Gears of War 5 video game, which will be released on Friday for Xbox One and Microsoft Windows.

"It's about damn time. Play as me in #Gears5 starting Sept 15 after @WWE Clash of Champions. @XBox @GearsofWar #DreamChaser," Batista wrote on Twitter, including a promo for the release. You can see that full tweet below.

Batista, who has tried to land a Gears of War movie role for a few years now, noted that his character will be available on Sunday, September 15 after the WWE Clash of Champions PPV. It turns out WWE helped him land the Gears of War video game gig.

The Coalition, the video game developers behind Gears 5, issued a statement to Bleacher Report and touted The Animal bringing his "signature WWE style" to the game.

"Dave has long been passionate about joining the Gears franchise, and we're thrilled to be working in partnership with him to bring his signature WWE style to the game. The iconic attitude of WWE's Batista will be incorporated into 'Gears 5' as a multiplayer skin, allowing both Gears and wrestling fans alike to jump into the action as Batista across all multiplayer modes including Horde, Versus and Escape," the statement said.

Furthermore, Rod Fergusson of The Coalition confirmed to Bleacher Report that the studio worked with WWE to make Batista's character happen.

"It's been a long time coming, but I couldn't be happier that we're finally making Dave's dream to be in Gears of War a reality in 'Gears 5.' The iconic, larger-than-life persona of Batista fits perfectly in the Gears of War Universe, and the entire team at The Coalition can't wait to see him take on the Swarm and all other challengers in multiplayer. Dave and the WWE have been a pleasure to work with, and I'm hopeful this is just the beginning of our partnership," Fergusson said.

It's about damn time. Play as me in #Gears5 starting Sept 15 after @WWE Clash of Champions. @XBox @GearsofWar #DreamChaser pic.twitter.com/bCU4ZIjdw1