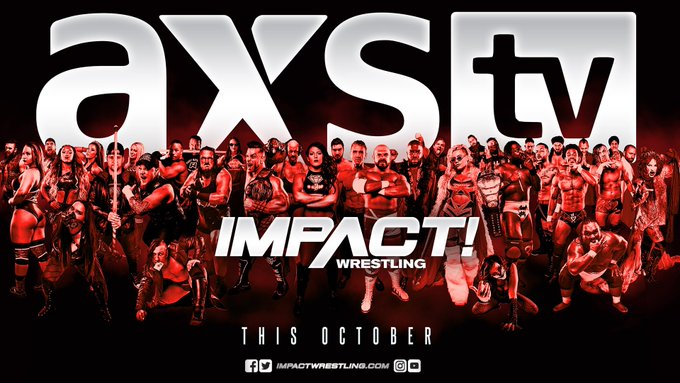 Impact Wrestling announced today that they will be moving from Pursuit to AXS TV in October following the Bound For Glory PPV on October 20. The weekly show will continue to air on Twitch.

There had been speculation on Impact moving to AXS and that picked up several days ago when Impact parent company Anthem Sports & Entertainment announced that they had purchased a majority interest in AXS.

You can read the full announcement from Impact below:

Immediately following IMPACT Wrestling's biggest pay-per-view event of the year Bound For Glory, which takes place on Oct. 20 in the Chicago area, IMPACT! will begin airing weekly on AXS TV. The program will continue to simulcast globally on IMPACT Wrestling's official Twitch channel.

"IMPACT Wrestling is a perfect fit for AXS TV's slate of live sporting events and combat sports content," said Ed Nordholm, Chief Corporate Officer of Anthem Sports & Entertainment and President of IMPACT Wrestling. "The newest addition to our growing portfolio of media assets, AXS TV's audience perfectly aligns with our passionate IMPACT Wrestling fan base, and this move increases the reach for our weekly program with distribution in over 50 million homes. We could not ask for a better home and are excited by the opportunities to work with Mark Cuban and Anschutz Entertainment Group, our partners in AXS TV, to bolster IMPACT Wrestling's presence in the market, as we continue to deliver action-packed and innovative weekly programming featuring some of the most athletic and gifted stars in the professional wrestling industry."