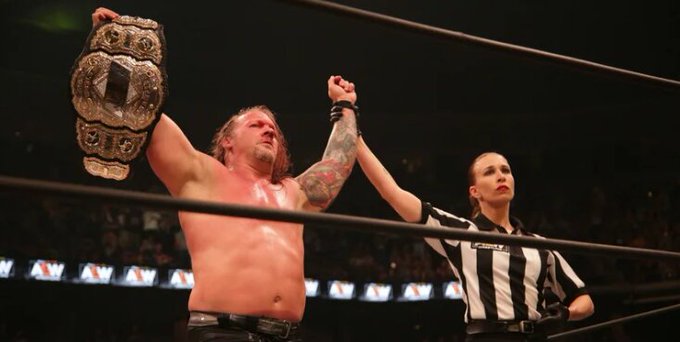 Chris Jericho had the AEW World Title belt stolen from him this week.

A Tallahassee, Florida police blotter revealed the incident report, noting that the alleged Grand Theft happened while Jericho ate dinner inside a Longhorn Steakhouse. The incident report lists 2400 North Monroe Street as the location, and that is where a Longhorn is located.

Below is the full incident report from the police blotter:

The victim reported the theft of his championship wrestling belt while he was eating inside Longhorn Steakhouse. The victim stated he arrived at the Millionaire Club Airport Terminal and placed the belt inside his rented limousine. The limo driver shuttled the victim to Longhorn for dinner. The victim remained at Longhorn while the limo driver returned to the airport. The victim had taken the wrong luggage from the airport and the driver took it back to the terminal. When the driver picked up the victim from the restaurant, the belt was missing. Responding officers searched the limo and airport for the belt without success. On-call CID was consulted, and forensics responded to the scene.

Jericho became the inaugural AEW World Champion by defeating Adam Page in the main event of Saturday's AEW All Out PPV in Chicago. He lives in Florida and had apparently just returned home.

Stay tuned for updates on the police investigation and how AEW is handling the incident.

You can see a screenshot of the incident report below:

Tallahassee Police confirm that this is real. Jericho's belt was stolen. https://t.co/S5Ht0LiYnx

AEW "Countdown To All Out" Viewership For TNT

The Rock Reveals Photos From His Recent Wedding