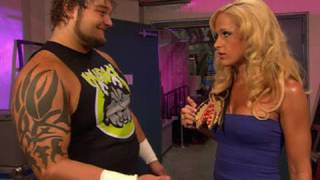 Despite her success, McCool admits that she has a hard time enjoying the moments because of backstage heat for her relationship with The Undertaker. McCool told Lilian Garcia on the Chasing Glory podcast that it wasn't "cool to date the guys" back then.

"I'm the worst at remembering those things. And, it was time where the business was very stressful and not as kumbaya as it is now," said McCool, via Wrestling Inc. "We fought and clawed our way onto TV screens. And it wasn't cool to date the guys. So, I had to struggle with the heat of being with Mark [Callaway] and people thinking I was only on TV because of him. It was hard to enjoy those moments because of the stress and what felt like was taking place 100 percent of the time."

You can listen to McCool's appearance on Chasing Glory below:

Listen to "Michelle McCool - Overcoming Family Pressure and Fighting For Opportunity" on Spreaker.